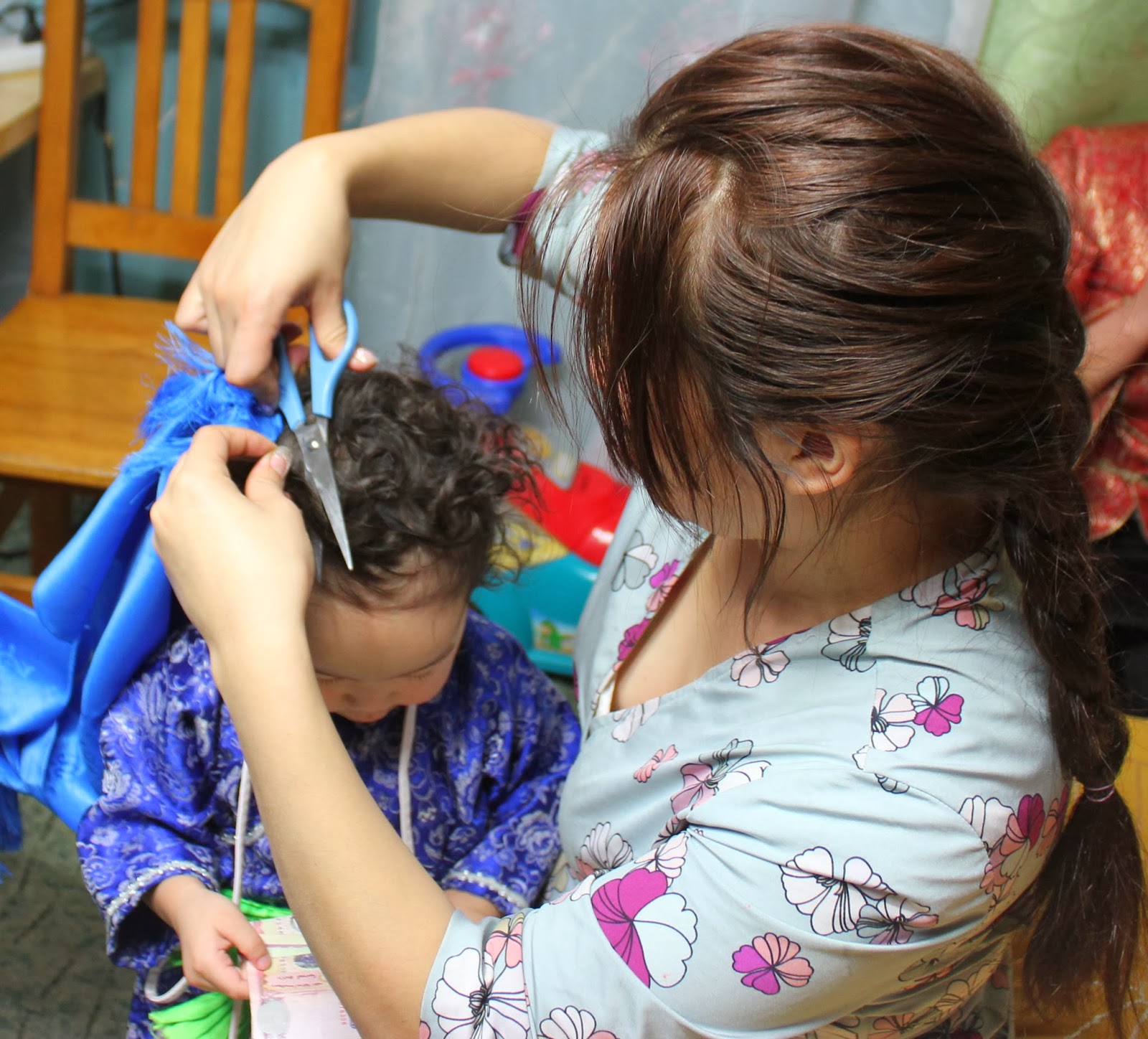 A Mongolian haircutting ceremony. Mongolian children get their first haircut in early ages between 2-5. It is called Daah Urgeeh. Depending on the lunar calendar, boys receive their first hair cut on an even year and girls in an odd year.
The ceremony symbolizes the end of "babyhood" and the transition to "childhood".  The transition from babyhood was and is so important in Mongolian traditional culture. Surviving babyhood, especially for children of herding families with little access to medical facilities, was an occasion to celebrate.


The time and date for the haircutting are determined by the year in the lunar calendar when the child was born. Traditionally Buddhist lamas or monks would advise families on the best days and best years to do the ceremony.
Guests arrive during the day to participate. Offering food and drink to guests are a part of the celebration. Closest family members and friends are present at the beginning of the ceremony. We were the first guests so we saw the initiation of the ceremony.  Other families hold the haircutting ceremony with a formal banquet with all the guests present from the start.


A bald head. The child’s head becomes more and more unsightly as swatches of hair are randomly cut. At  the end of the day, after all the invited guests have finished, the child’s head is shaved - boys and girls alike - and the new hair grows out in a healthy fashion much like the symbolism of permanent teeth replacing baby teeth.
The khadag, a silky blue ceremonial cloth used in Tsaagan Sar greetings, with the hair knotted at one end is kept by the family and presented to the child at another stage (late pre-teen or early teen-age) in his or her life.
When you see Mongolian toddlers and children, it is difficult to tell the gender of the child because of their long hair. Then after the haircutting ceremony, it becomes equally difficult to tell the gender because of their shaved heads.

We quickly learned to pay attention to clothes before putting our feet in our mouths. 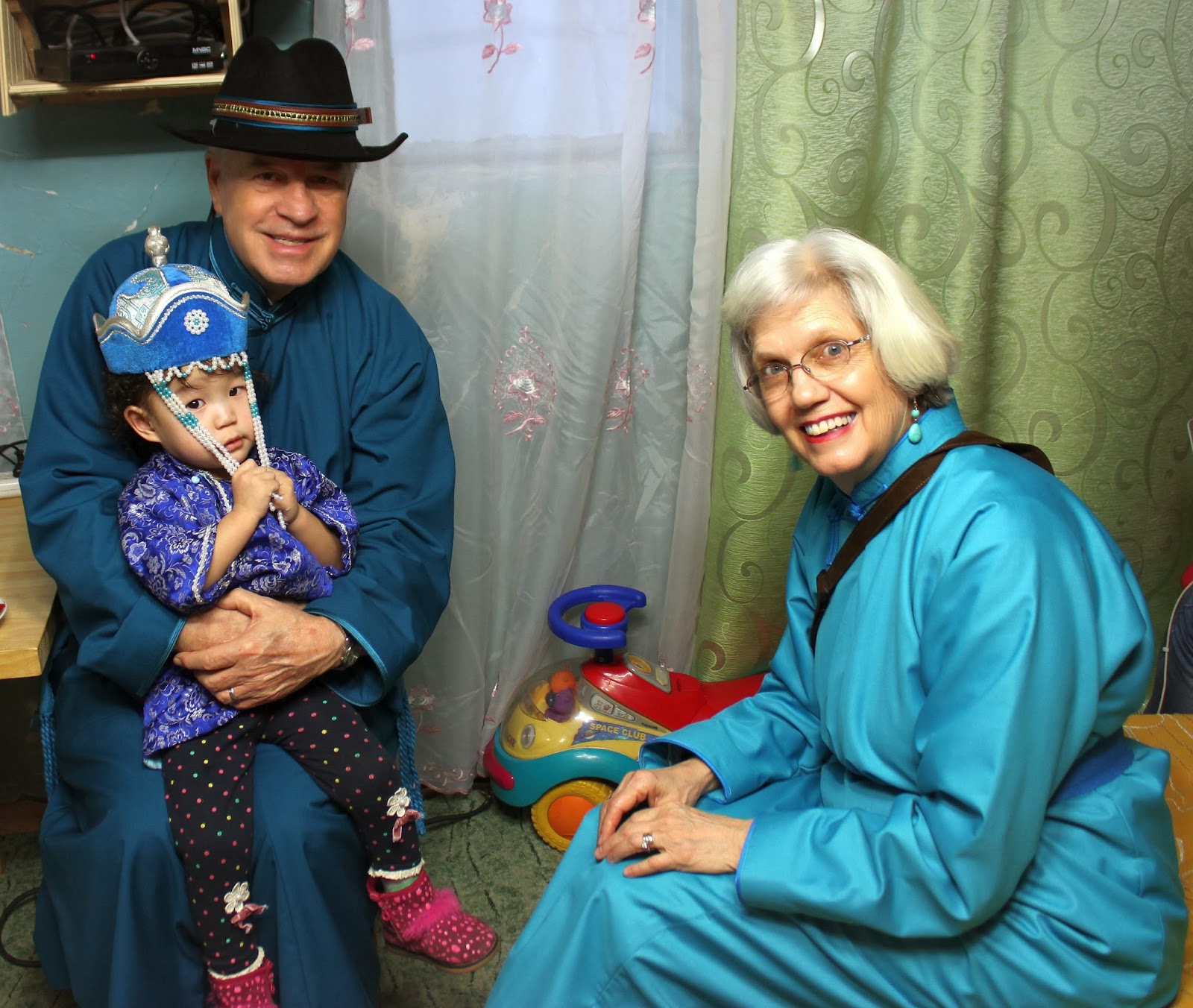 Our invitation. We were invited to a haircutting ceremony. This is an honor and a privilege as most foreigners don’t get to participate in this unique Mongolian coming of age ritual. We have been in Mongolia almost 20 months and this was our first invitation.

Our good friends from the Sukhbaatar Branch, Odgerel and Saranchimeg, invited us to come to their home at 8:00 am.
We had previously bonded with Gerelsaran and she seemed to enjoy her relationship with us funny looking Caucasion old folks. 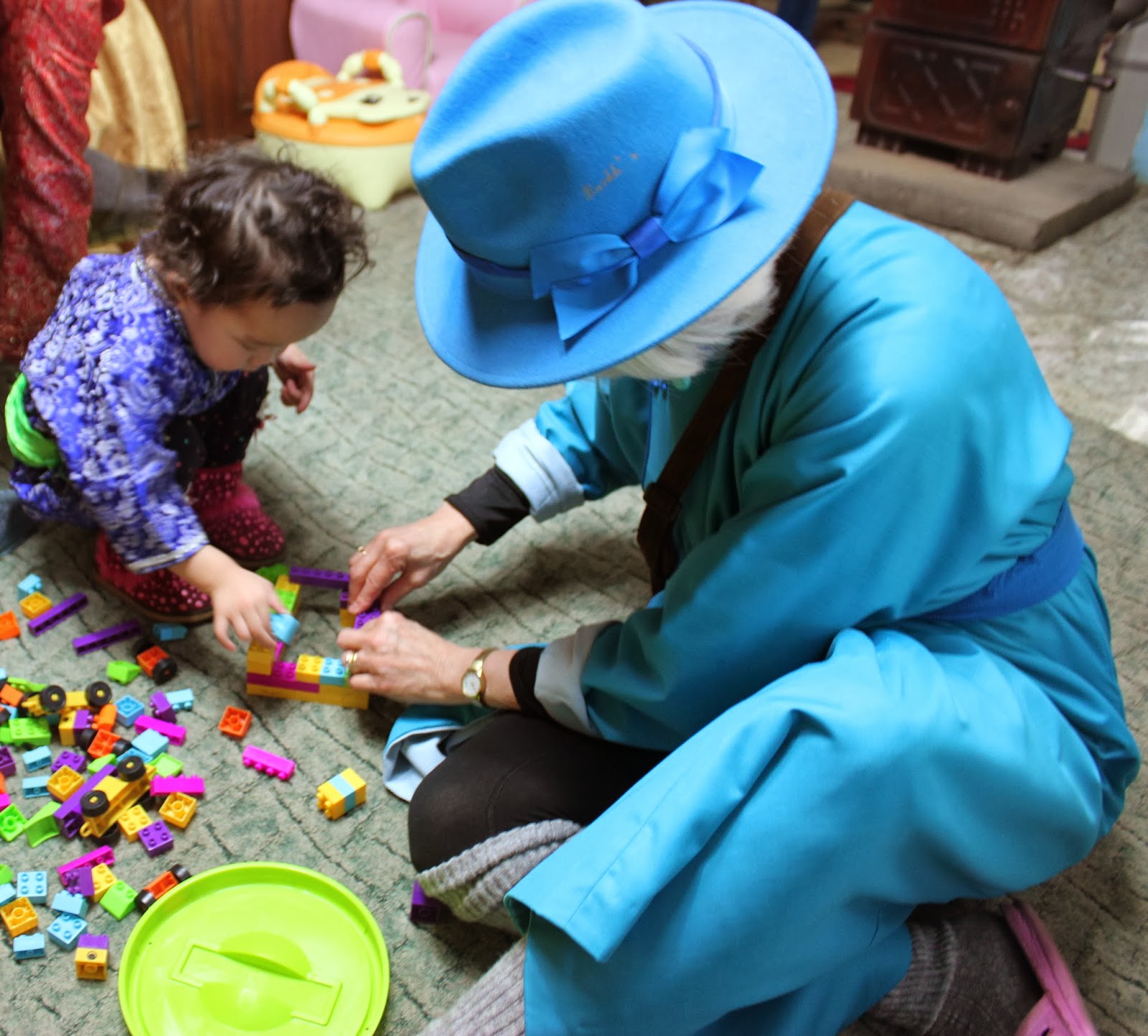 We are dressed in our deels because the haircutting ceremony took place during the Tsaagan Sar holidays.
How it is done. An older neighbor lady who knew the ritual thoroughly was there to guide the family through this process. The first cutting was done by a young cousin whose lunar birth year was an ideal match for the Gerelsaran's lunar birth year. I believe the person doing the second cutting was also determined by the same process.
The neighbor lady cut second. After that, different family members present took turns in no apparent order.
A knot was tied in one end of a blue khadag as a depository for the locks of hair cut from the Gerelsaran’s head. The scissors were tied to the other end of the khadag. The person giving the haircut would be offered a drink of milk tea  (haarum) or, in some cases, fermented mare’s milk (aireg). 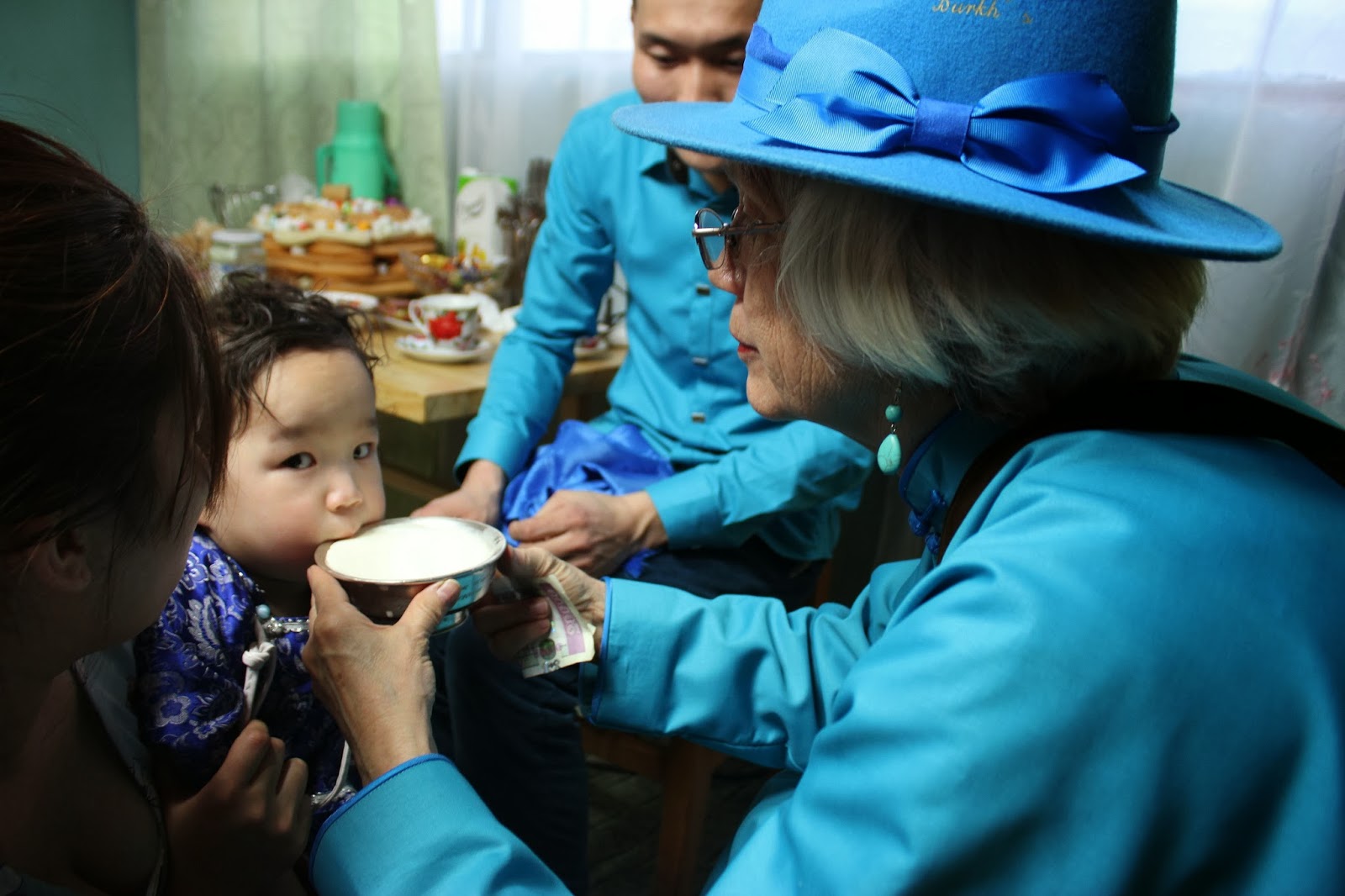 The guest or family member then offered the drink to the Gerelsaran. 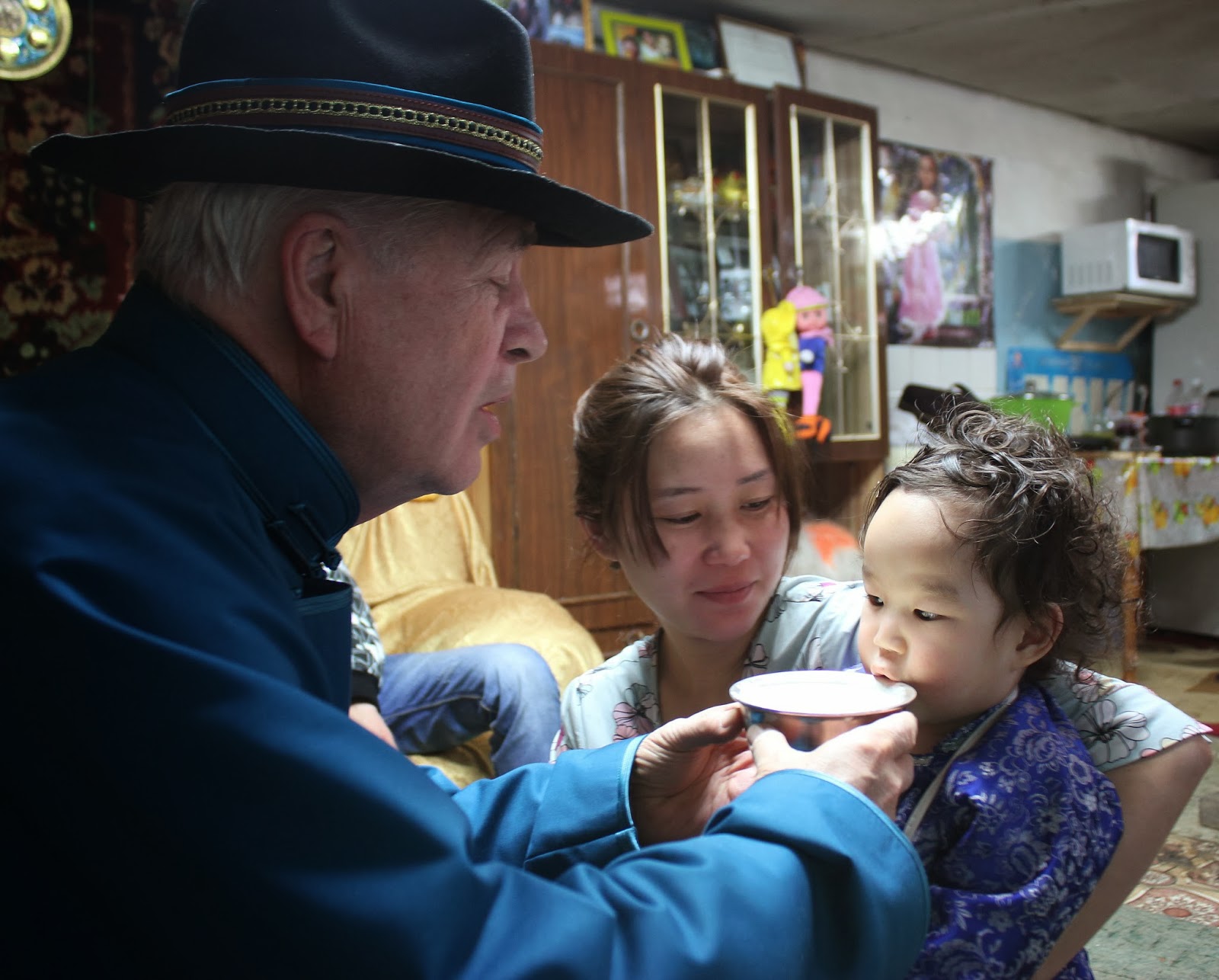 Then a dab of milk is rubbed into Gerelsaran’s hair. A lock of hair is then cut and placed in the khadag.

The guest or family member then offers the child a gift, usually money (symbol of good fortune) but it could be a toy and then gives a wish or a blessing. It is something simple like "Be a good person".
In our situation, Gerelsaran quickly figured out she could put the money in her purse and this was a good deal. Once she made this connection, she cooperated with the unusual expectations of drinking ceremonial milk, having milk rubbed in her hair and allowing her hair to be cut.