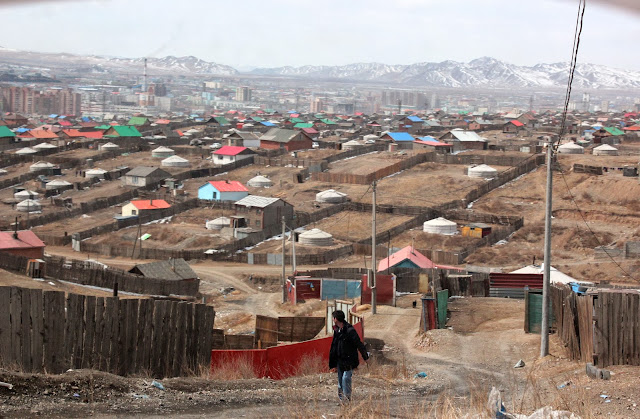 Ulaanbaatar, the capital city of Mongolia is a city of 1,300,000 people in a country of nearly 3 million people. 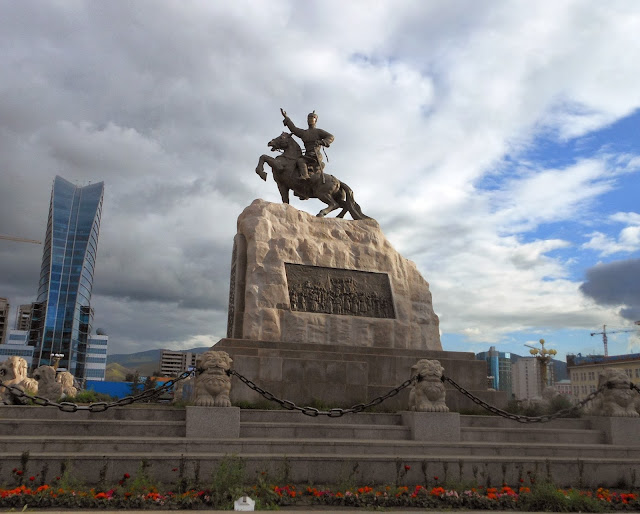 There is a Sukhbaatar Province in the SE corner of Mongolia next to China or Inner Mongolia on the south. There is a city of Sukhbaatar (25,000 or more) on the northern border with Russia.

The Trans-Siberian railroad stops in Sukhbaatar and passengers wanting to go to Ulaanbaatar or Beijing can take a spur that cuts across Mongolia. 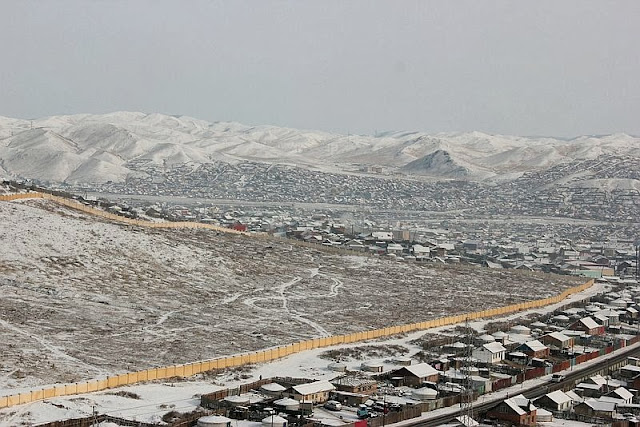 The Ger Districts are comprised of traditional circular felt tents or dwellings or small wooden houses. 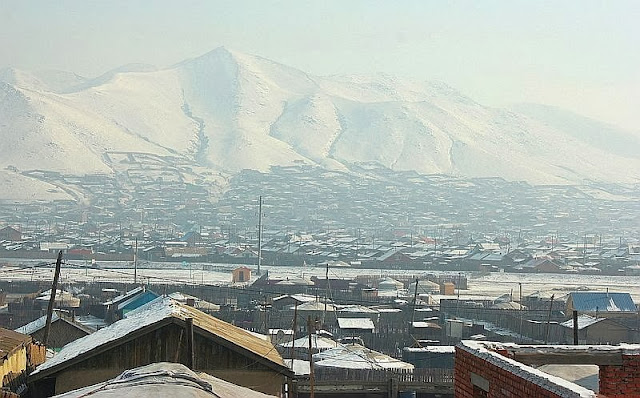 There is no running water or central heating in the Ger Districts.

Families have to haul their own potable water to their homes from dumping stations in 5 gallon drums. 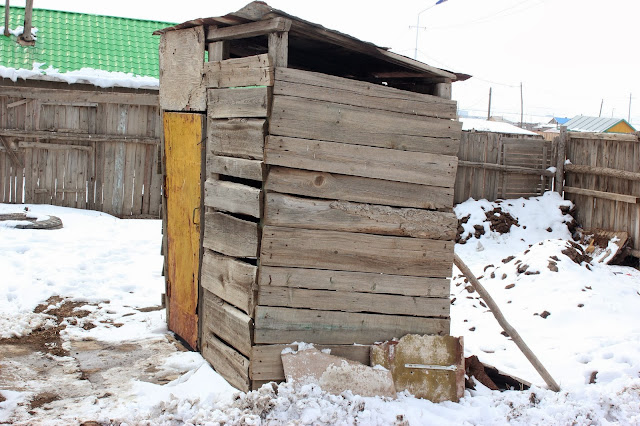 They also have outhouses for toilet facilities. 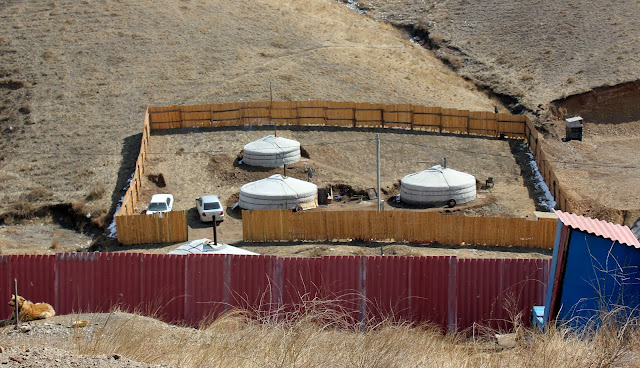 The Gers and wooden homes have coal and wood burning fireplaces to heat their homes during the day and night during the winter. 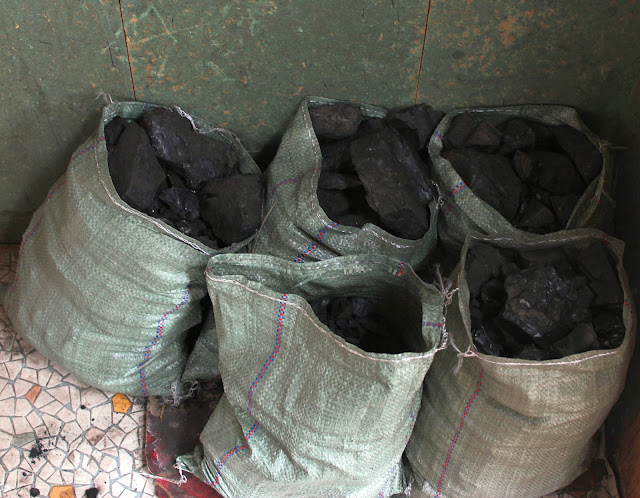 They do have electricity. 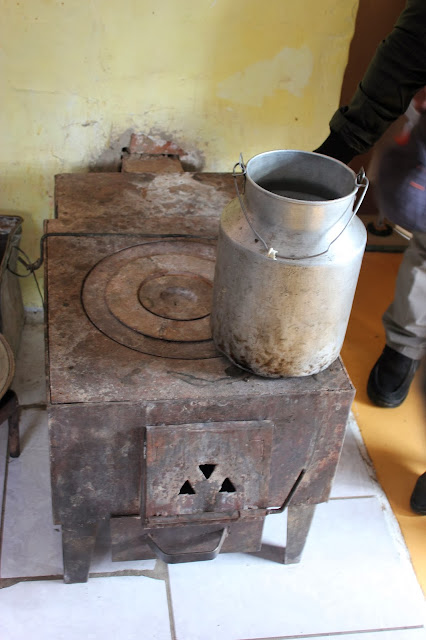 About 600,000 of UB's population live in Ger Districts. Many people live middle class life styles and have good jobs but are unable to afford rent or buy apartments which is the next step up in prosperity and convenience. 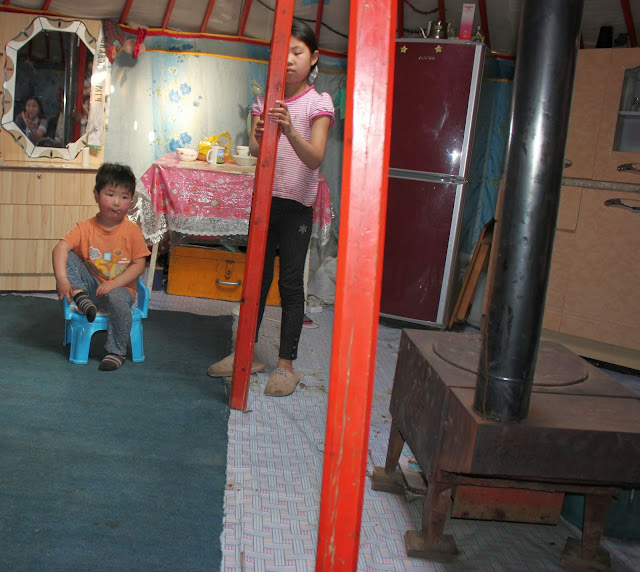 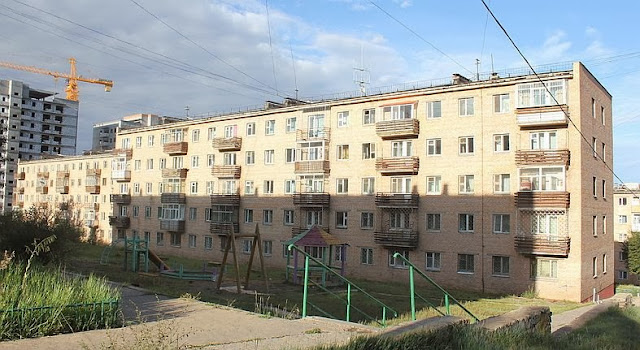 There is no stigma to living in a Ger though generally the people living in poverty also live in the Ger Districts. 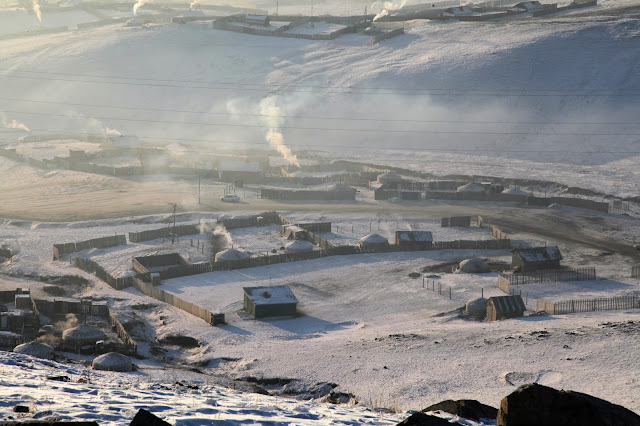 The Ger Districts are the main source of winter smoke and pollution for UB because of the coal fires. 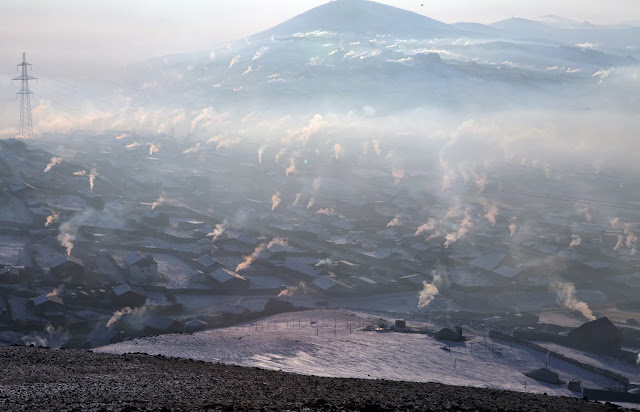 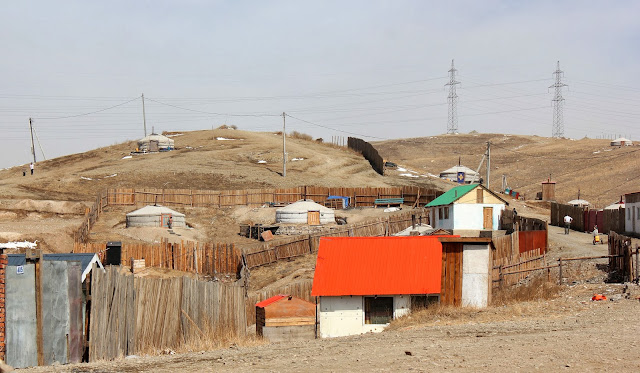 The outer suburbs of UB are Ger Districts and the terrain is usually hilly compared to the main city which is flat and runs in along narrow band east to west. 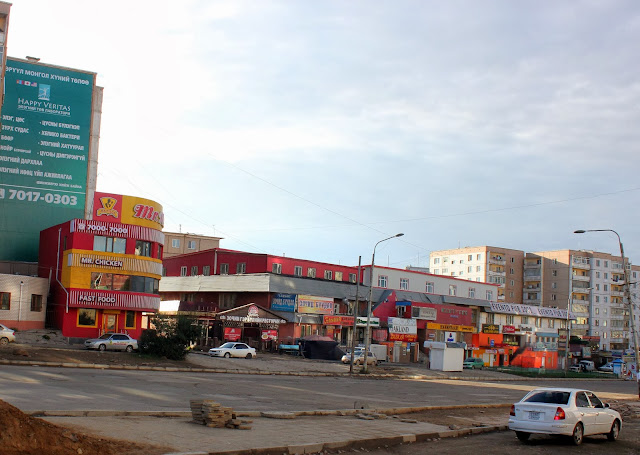 There are over 10,700 members attending in 12 church units in UB and about 22 in the country total. In UB, the church is divided into the West Stake (more prosperous) with six wards and the East District (six branches) and generally poorer and has the bulk of the Ger Districts.
Because of visa sponsorships to teach English, American and foreign missionaries are assigned to church units in UB though recently we have just started being able to place young foreign missionaries in the Darkhan District (also six church units in the north part of Mongolia - two branches in Darkhan, two in Erdenet, one in Sukhbaatar, and a branch in Zuunharra.

The fourth mission branch is located at a gold mine in the Gobi Desert at Oyutolgoi. No missionaries are assigned there. There is a church unit or group that meets in Bulgan - a city about 60 miles west of Erdenet. Bulgan has missionaries assigned.

The Mission has just started a Long Distance Branch where members meet over the Internet. This connects members who live more than 30 miles from any church unit. This is innovative and is patterned after a virtual branch for ex-patriots living and serving in China.

here are about 20 young foreign Elders and Sisters serving in Mongolia and 18 live and serve in UB - maybe the only place they will serve in Mongolia.

There are about 10 senior couples serving here. Two couples and soon to be three are or will serve in countryside branches. All foreign missionaries young and old are English teachers and that is an essential part of our visa requirement to be in Mongolia.

There are more than 60 Mongolian missionaries serving in the Mongolian Ulaanbaatar Mission. There is one senior missionary couple from Mongolia serving in Sukhbaatar.

Maybe one in ten missionaries called from Mongolia are serving in foreign missions - the rest are called to serve in their own country.

The Mission President has to be aware of not having them serve in their home wards or branches and not have them serving close to their former girlfriends or boyfriends prior to their missions.

This is a logistical consideration in making mission transfers. Thank goodness for countryside branches!

Occasionally Mongolian missionaries from UB and serving in UB run into family members and friends on the street and are instructed to greet them cordially. Obedience to mission rules protects them from having relationships that will distract them from their missions.

A visit to the Sun Child orphanage in Darkhan

On Saturday I had an opportunity to travel to Darkhan with two other senior couples - the Nays and the Englands. Darlene stayed home to rest, cook and clean all day. We spent eight hours on the road (round trip) altogether to take in a closing ceremony on a Humanitarian Service Project at the Sun Child orphanage.
The church has sponsored several projects with the orphanage over the years. Currently the Fredleys, who live in Darkhan, teach at their school. They love their assignment.
The orphanage serves 37 children ages 6-18 and continues to sponsor and provide support their High School graduates as they go to college. All of their 10 graduates from last year's graduating class won scholarships to the National University of Mongolia.

They have a sponsorship with a benefactor organization from Japan. The students 9 and above form a musical performing group and travel to Japan once or twice a year to put on performances and raise money for their school. They also have a bakery that sells products to the Darkhan market. The students produce art work they sell to the public and get to keep the proceeds. 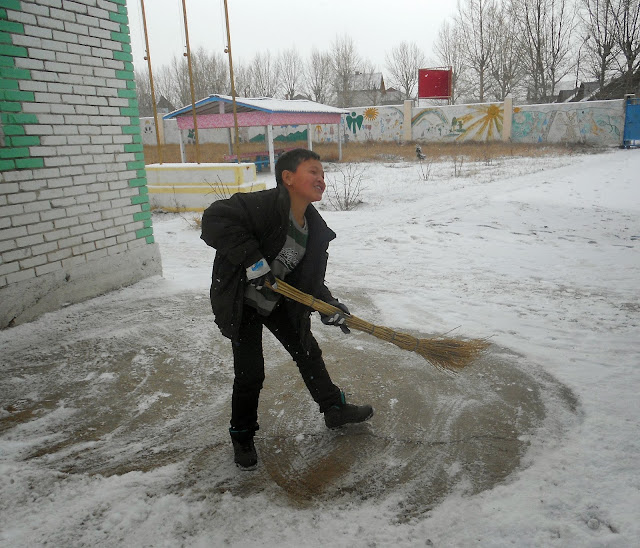 This was an inspirational visit. It shows how much good is being accomplished here in Mongolia with a few dedicated staff and some philanthropic support.
After a formal meeting and report on their work, we enjoyed a tour of the facility and then watched the children put on a special performance for us. I left my camera behind so the Englands shared these photos with me. 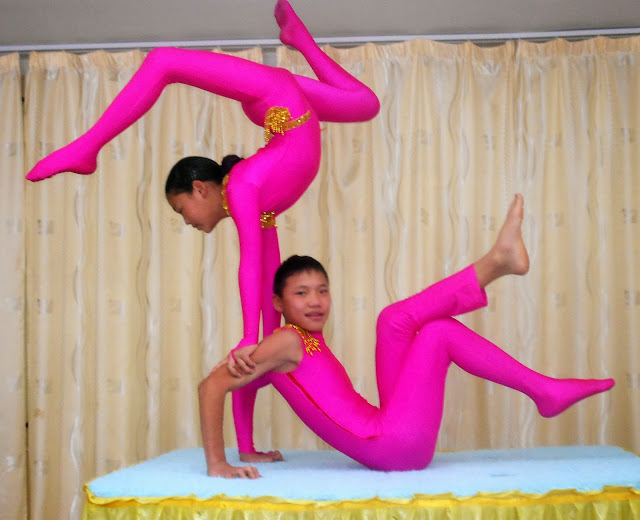 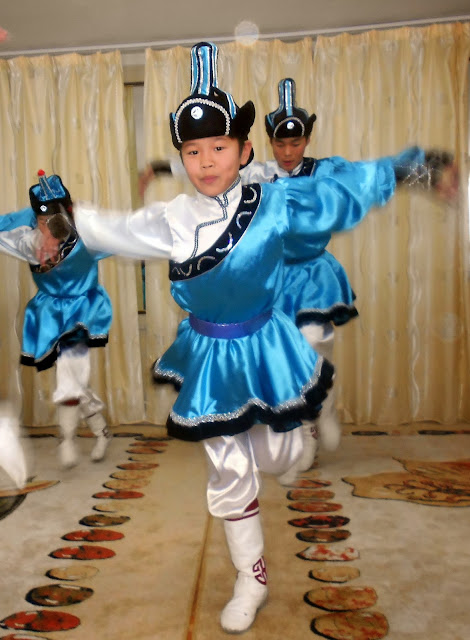 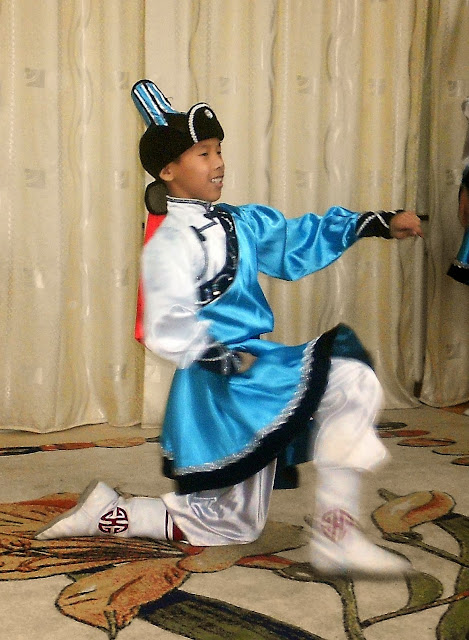 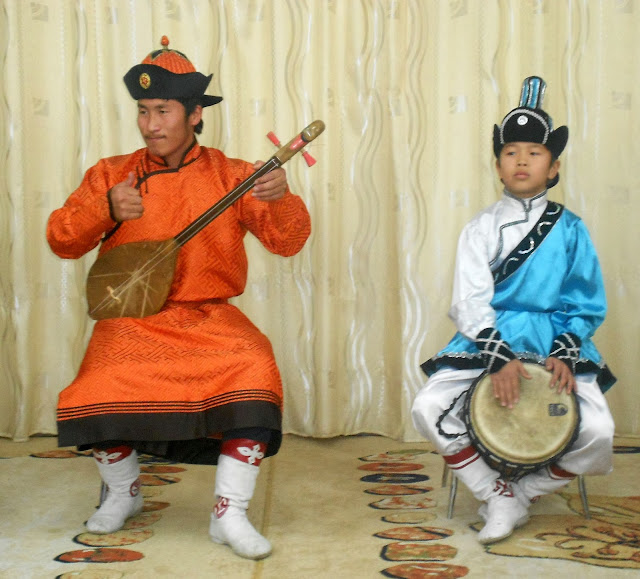 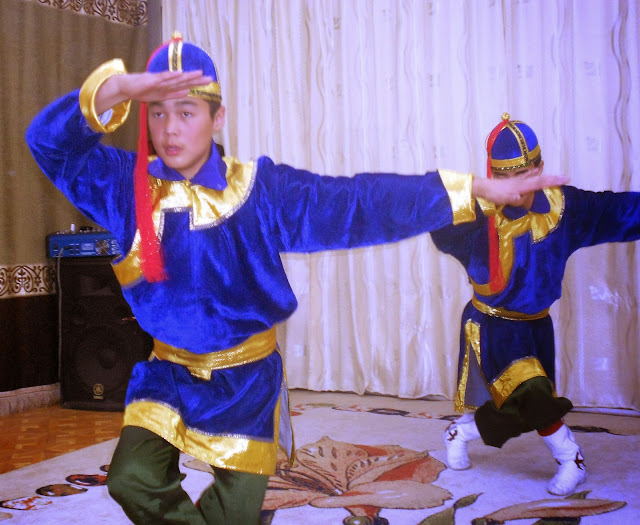 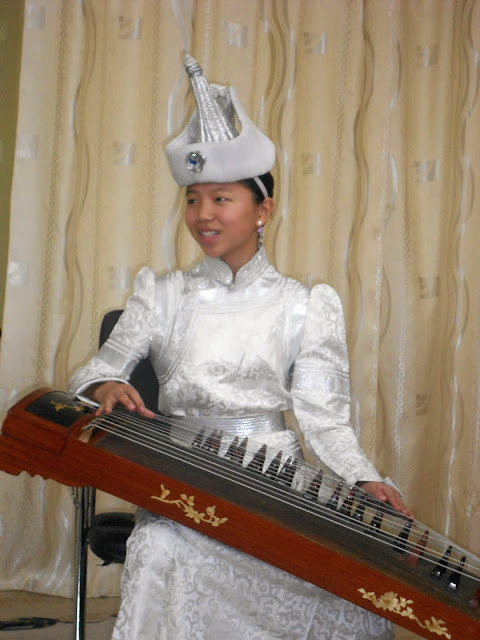 New Missionaries arrive. We had four new missionaries arrive from the United States and 11 from Mongolia to serve in the Mongolia, Ulaanbaatar Mission.
It was fun getting acquainted with them. We had something in common with Sister Eskelson being she was from our stake in St. Louis.
Family History work. We helped train the new missionaries on how they could use Family History to help them in their missionary work. Darlene was practicing what she preached as helped a young investigator register in Family Tree and enter her family data.

We later attended a baptism service at the Sukhbaatar Branch.
It was great to be around the members of the branch we’ve been attending since our arrival here. 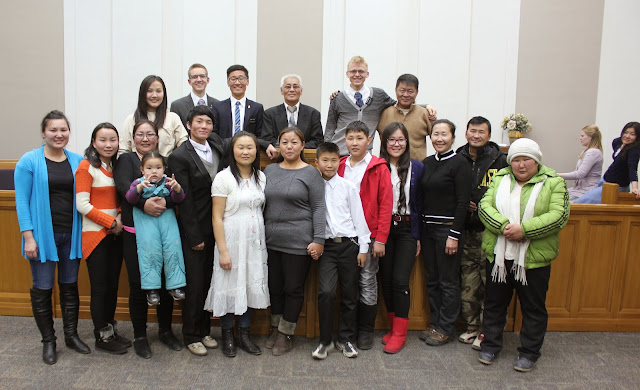 A birthday surprise. We have an office where we supposedly have the only keys. The reason for this is that in order to change the keys, all of the hardware on the door would have to be replaced.
﻿﻿

Sister Stewart, next door in the Medical Office, was rummaging through some keys she found and tried a key that opened an inner door connecting our two offices.
﻿﻿

About twenty people gathered inside our decorated office. Ulziika called our apartment to tell us we had a patron waiting for us at our office. We hurried over and when we unlocked the door, the whole room what filled with people. Darlene shrieked in surprise. It was certainly a wonderful gesture - a complete surprise.

We also had a birthday party that night with our English class. They surprised us with a birthday cake and a special purse for Darlene.
﻿I made chocolate chip cookies from scratch. We chanted a catchy rhyme, “Who Stole the Cookies from the Cookie Jar?”. It was a wonderful way to end a very special day.
That night and the next morning (Darlene’s birthday in the US) we had a series from Skype calls from our children who variously took turns visiting with Darlene. "San Baina!"
﻿


Darlene’s health. We got some test strips back from Hong Kong and her blood sugars tested in the normal range. She exercises daily. Our diet is a lot more strict than it used to be. We are also being more careful to not overdo our activities this winter so we don’t wear ourselves out.
Winter smoke fills the air. We are both wearing masks to protect us from the smoke pollution in the night and morning air. We had two consecutive daily readings showing that Ulaanbaatar has 2½ times the air pollution as Beijing, the most polluted city.
Ulaanbaatar ranks second on the list of polluted cities in the world. It mainly occurs in the winter when a combination of coal burning fires from the Ger Districts and an air inversion pattern similar to Salt Lake City prevents the air from moving or being blown away.

We had a light snowfall that cleaned up the air but I am afraid that is only a temporary respite.