Mongolian language.  Our teacher is Bolormaa Jenkins. This week we are making progress relative to where we started but definitely not in terms of where we need to be. “Darlene and I partners good are.” Oops! I just wrote a sentence that the natives of Pandora, Yoda from Star Wars and the Mongolian people would endorse as proper speech. The problem is Mongolian grammar is about opposite from the way we construct sentences. 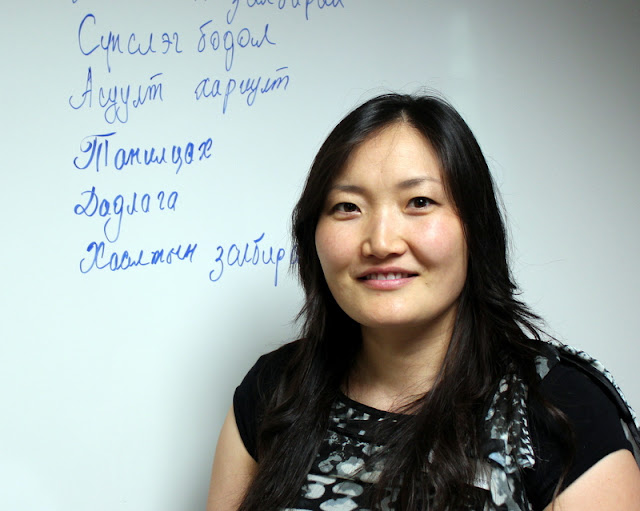 And that is the easy part. Mongolian grammar is still simpler than Russian if that is any consolation to anyone other than Mom.

The hard part is pronouncing and understanding the language. It seems like they fell in love with about 20% of the sounds in our alphabet, the hardest 20% I might add, and made a whole dictionary of words from these overused sounds. Let me share a few with you, “x” as a breathy “h” or an almost silent “h” or as a gasping, guttural coughing “h” or other variations. Woe be unto the foreign speaker who doesn’t hear it or mispronounces it! It seems like half of their words either begin or end in “x”.

Almost as tough is the “g” which is the twin of the “x”. This sound can vary between a hard guttural sound or a light clicking in the back of the throat and most English listeners can’t hear it and all Mongolians can. Other sounds of note are the Mongolian “j”, “z”, “ch”, “ts” and several varieties a puking “uuugh” sound that is one of their main vowels. Throw in a few diphthongs (the middle part of dipththong looks like a Mongolian word) represented by an “N” with a diacritical mark over it that changes the way vowels front or back of it are said. Did I mention hard signs and soft signs? Same thing.

The “L” sometimes sounds a “d”, sometimes like our “L” but most of the time it sounds like a lisping “lth” that occasional but not always impersonates an “x” or a “g”.  I swear the “x”, g, and the “l” are their favorite sounds. The hardest English sound for Mongolians to master in English is the “L” so it stands to reason we would struggle with this highly versatile sound in Mongolian.

For example,  xul, xyl, xox, xoox, xogox, xun, xel, zak, zaak, zyyl, zych,  zyyj, zogc, etc. etc. and I haven’t even mentioned two additional “y” and “o” sounds that are written a little differently but make a huge difference. “Oops” looks like a Mongolian word except that the “p” is pronounced like an “r” and the “s” would probably sound “gch.”

Miss one consonant or saying a vowel too long and you might be saying a bad word or any other closely related word. One example of this was when I offered to kiss the Mongolian teacher instead of meet her. Big reaction! – to her, it was humorous. In Mongolia, I am not so sure. Another example was when Darlene said the word “bac” in the middle of practicing her testimony. The teacher immediately interrupted her to point out that the Mongolians say this word quickly. Stretching out the vowel turns it into the equivalent of saying #2 (as in toilet training) in Mongolian. Did I mention that the word “bac” means “and” in English? Needless to say, we picked up our pace a little after that episode.

It is extremely important to say your  first vowel correctly then after that the more you leave them out the better your speech. Another big “Woe” is not to pronounce these devilish consonants all bunched together like “jgchl”…and remember that the goal of any self-respecting, fast talking Mongolian speaker is to leave out as many of those aforementioned vowels as possible while delicately hitting each consonant as if it were the “King’s” English. Connect one consonant-loaded word with the next one and glide quickly from one sentence to another and you have a recipe for language only Mongolian babies and Mormon missionaries eventually can understand. The only languages harder to pronounce might be Hungarian or Finnish. Those languages aren’t our problem. Mongolian is.

In summary a famed travel writer once described the Mongolian language as “listening to two cats hiss and spit at each other until one of them throws up.” Two years from now we hope to come back raving about what a beautiful language Mongolian is, how simple and straight forward it is compared to English, and how beautiful the church hymns are when they are sung in Mongolian. In the meantime, I am staying with my initial assessment. YYuughjchhxoxoxd!, which translated means the preamble to the Declaration of Independence or four verses from the Book of Mormon. Either way, Darlene and I are lost when a Native speaker cuts loose with vocabulary that we supposedly know.

Teaching English. This last week was spent finding out how much of our missionary work will be teaching English to Mongolians. We are being sponsored into the country as certified teachers of English as a Foreign Language. Two years ago it became one of the requirements to get a visa for our missionaries from the Mongolian government.

We will be teaching English 12-14 hours a week to whatever group sponsors us (University, medical school, police detectives, businesses, Red Cross, elementary or High School, government agency, social services, etc. Each group pays $225 a month (an average monthly salary in Mongolia) to the government to procure services of one native English teacher. The government doesn’t mind the church’s missionary work as long as we fulfill our responsibilities to teach English.

We had two ace professors from BYU give us (5 Elders going to Mongolia and ourselves) instruction on how to teach English to Native Speakers in their own country. Were we ever humbled! We don’t know basic English grammar (except intuitively) nor do we know how to explain it. We were shown tremendous resources including two big books we need to read before going to Mongolia.

We watched a master teacher teach a lesson to a group of missionaries learning English. The next day Darlene and I team taught with the master teacher and next two days we had one class to teach while the two sets of missionaries going to Mongolia each taught a class. We had to come up with our own lesson plan. We were observed and then debriefed in front of the training class about the “+ and –‘s” of our presentations.

We had a class consisting of an Elder from mainland China, an Elder from Mexico, a Sister from Armenia, a Sister from Italy, a Sister from Honduras and a Sister from Guatemala. They had different levels of English proficiency. It was a challenge. We bonded with them and did a good job. Mom has had a secret desire to teach English as a second language and she will be getting her wish with this mission. She is a natural teacher so she is up for the challenge. It will consume a lot of mission time however.

Mission Buddies. We also have bonded well with the five missionaries going to Mongolia. Three are from Utah, one from Pocatello, Idaho and the last one from Portland, Oregon. Darlene accompanied them this morning as they sang “Nearer my God to thee” (the final two verses in Mongolian) at their Sacrament meeting. We also attended one of their Saturday classes. Our mission will overlap with their missions almost perfectly. The next group going to Mongolia comes in July. Evidently, there are only a  few visas available to North Americans to go to Mongolia so they are a select group.

Elder Perry. We went to the Tuesday devotional with Elder L. Tom Perry the guest speaker. He spoke on the restoration of the priesthood (May 15) and told a moving story of a young boy getting a personal testimony from an elderly Martin Harris living near Cove, Utah about his role as a witness of the Angel, the Voice of God and the golden plates.

Elder Perry told it from the perspective of how he, as a deacon age boy, listened to an old man (Bro. Pilkington) tell an Aaronic Priesthood gathering at Martin Harris gravesite about how Martin Harris bore a powerful testimony to him when he went to work for the Harris family - also at a deacon’s age. From Martin Harris to Deacon to Deacon to us. This account has been recorded so it’s not just memory.

Testimony in Mongolian. On Friday Darlene and I went to a testimony meeting for missionaries who are going to foreign countries. Each of us bore our testimonies in our mission language. Our main tutor and teacher Bolormaa Jenkins accompanied us. Each set of about 8 missionary couples was there accompanied by their tutors. Testimonies were given in Chinese, two dialects of Philippine languages, Slovenian, Italian, and the language of Madagascar (whatever that was) and ourselves. It was touching to see each of us labor with the languages and still have the Spirit come through.

Missionaries for real. Today we went to the Asian Ward on Campus and attended the Sacrament meeting and the Mongolian Sunday School class.  After a sacrament meeting attended by a more than 300 young black haired young single adults, the first two people we asked about finding the Mongolian Sunday School class were the teacher and her good friend. In class, we met some neat people and took a picture, names and addresses of their family members in Mongolia. We will follow up with them. There was also a young woman from Russia there who brought a Mongolian investigator. We also got her family names in Ulaan Baatar. We felt like missionaries.


The Right Stuff. Last, we love our I-Pad! We whipped out the I-Pad and Kindle at both meetings today and felt instant rapport with the Elders who suddenly held us with much greater esteem.  The elders were cautioned not to bring I-Pads because that would make them the targets of thieves. Darlene's purse is a pretty good container of precious things and we will definitely not blandish our I-Pad in public no matter how much prestige it might bring us. Besides think of the weight it saves us by not having to pack scriptures or lug them around in Mongolia.