Monday with the Clarks. This was a dramatic week. On Monday morning at about 8:15 am we received a phone call to get ready in 5 minutes to go to the government building. We were going with the President. We thought it was official business and we scurried and put ourselves together on short notice. It turns out that the Clark family was going on a tour of the parliament building and we were being included in the tour group.
When we got there, some of the Clarks were dressed in pants or casual attire. They had to go back and change. We finally got on our tour at 10:00 am. There was a Mongolian group of about 30 people from one of the provinces grouped with our group of 20.
We didn’t have our camera with us. We’ll get another tour before our mission is over. We couldn’t go into some areas because Hillary Clinton was paying a state visit to Mongolia that very morning.

Darlene went shopping later on in the morning and into the afternoon.


That evening Clark family presented a musical fireside and short talks to about 200 Mongolian members. We and the other senior couples were also included. The Clarks had two daughters, their husbands and children singing and playing instruments. One Mongolian brother played a traditional two string instrument and a string quartet of young Mongolian sisters played in concert. The Clark family made a major effort to plan and perform in the middle of their vacation. It was an endearing and spiritual experience.


Getting acquainted, getting organized. On Tuesday, we had planned to meet our sponsors and then go to Immigration. The whole thing finally was postponed until the Thursday after the Senior trip next week. One of the Mongolian sisters, Puje, took us to buy a couple of cell phones (about $80 for the pair with some programming work on one of the phones included in the cost).
Darlene had a long visit with Naraa in Russian regarding her upcoming family reunion this August for about 300 relatives. Naraa has a wonderful set of records and family history she has put together. She is a shining example of what can be done in Mongolia with purpose and determination.

Going to Naadam. On Wednesday, we went to Naadam with the Hunts and October. We sat in the same section as the Clark family. We took in the culture, atmosphere and pageantry of the opening ceremony. We followed this up by watching archery, watching the sheep ankle bone shooting contest and wrestling initial matches. We did about everything but go to the horse racing. Maybe next year. Our pictures are included in an earlier blog.


We gathered together again along with the Richardsons and the Shropes for a dinner at a Japanese restaurant. Very good food! It was a great day from start to finish.

Holiday outing with the young missionaries. On Thursday, we were invited to a picnic outing sponsored by the young elders and sisters. We were their guests. The senior couples brought food anyway to supplement the main course. The night before, the Mongolian elders purchased a lamb, slaughtered it and cut it up for be cook the next day Mongolian style in an old fashioned milk container.


It took about an hour on a very crowded bus and then we walked another 20 minutes to reach our destination   - a picnic area along side of the Tuul River. There were several Mongolians groups and families at this same site. We arrived around one o’clock. We didn’t have any wood for our fire. We spent the first hour scavenging what was a well gleaned area. A local resident gave us some boards from his fence to use for our fire.
﻿
﻿Besides eating, the missionaries played soccer, tossed a Frisbee, played games, wrestled, played and sang with a guitar. Nothing was organized - all informal and spontaneous. There was a lot of mixing and fun. It was their deal and the senior couples helped out as much as we could without taking over.

The lamb meal followed the same pattern. This is how the meal was prepared. Rocks were heated in separated fire. Onions, carrots, potatoes, Mongolian type turnips, water and about 20 hot rocks were all interspersed with the lamb meat in tdifferent layers in the milk container. The can tipped over once and about 20% of the contents spilled out. Everything was quickly put back in.  L


They didn’t leave enough air under the milk can for the fire to bring the water to boil. Whether they are Mongolian or American, they are only 19 or 20 so learning takes time. They finally moved the milk container to a neighbor’s fire after their meat was cooked in an identical fashion. We finally got to eat around 5:30 pm.

The young elders and sisters ate the meal with relish while we seniors were less enthusiastic. I heard that the ribs were quite good and tender. I had a piece of meat that was less desirable and didn’t have much of an appetite. I didn’t see many vegetables.


I was offered some broth from the bottom of the milk can. It was a combination of grease, broth, and vegetable particles and whatever other nameless ingredients got into the can. I was a good sport. We all tasted the fermented mare’s milk they also brought. The Mongolians thought it was the “Cat’s Meow”.
The bus ride home was slightly less crowded but I was definitely taken aback when Mongolian women and children offered me their seat. I would like to think it was respect instead of age they were responding to. 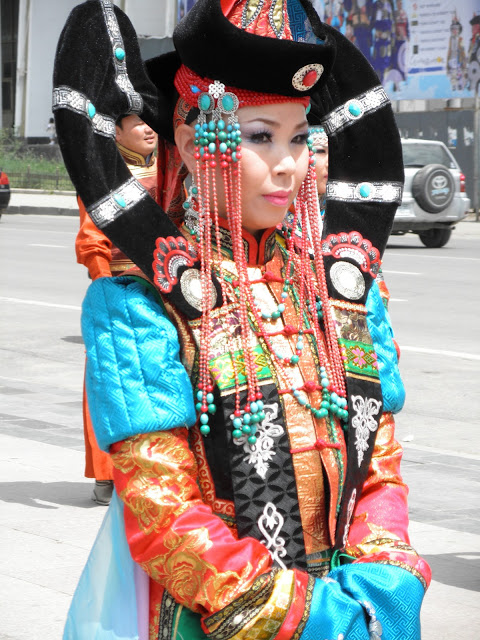 The festival of the deels. Again it was us, the Richardsons, and the Hunts that set out to take in this event. It was a photographer’s dream. Again, go to the blog to see a few of the sights we saw. Mongolia has a deserved reputation for being an exotic place to visit and see. The parade was about 90 percent complete when we were hit with a sudden and unexpected downpour.
We retreated at a popular American “expat” restaurant, Millie’s. We ate Philly cheesesteak sandwiches, fries and hamburgers. Darlene and I don’t go out of our way to find American food but others do. It hit the spot and we were dry. 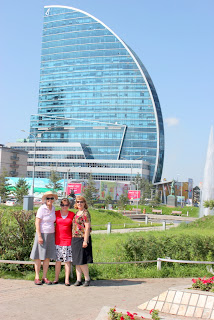 The restaurant is close to an old Buddhist temple and monastery that has been converted into a museum. It is also next to the most recognized skyscraper in Ulaan Baatar – the Blue Sky building. 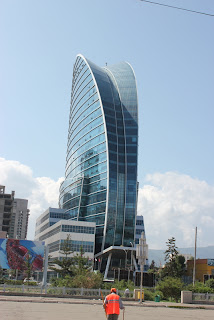 Saturday was spent resting up from all of our touring. If you are wondering when we do actual work, we are too. We arrived in the country when everything shuts down for a couple of weeks. Get ready for another tourism oriented blog as we are going on a 3 day annual senior couple retreat including a visit the Gobi desert, a visit to a Buddhist and temple monastery, a two night stay in a ger camp, and a visit to a 13th century reenactment camp of Chinggis Khans’ warriors. We will dress in the battle armour and eat as they did.
I believe the first three weeks in the country will far surpass any other three week sight-seeing period we can conjure up – until next year. We were informed that we will be only senior couple left from the current group in country and will be shepherding the new couples into this whirlwind of activity.
Posted by Val Farmer at 6:53 AM